Skip to content
All volunteer charity where 100% of all donations goes towards helping needy and homeless children, families and their pets. 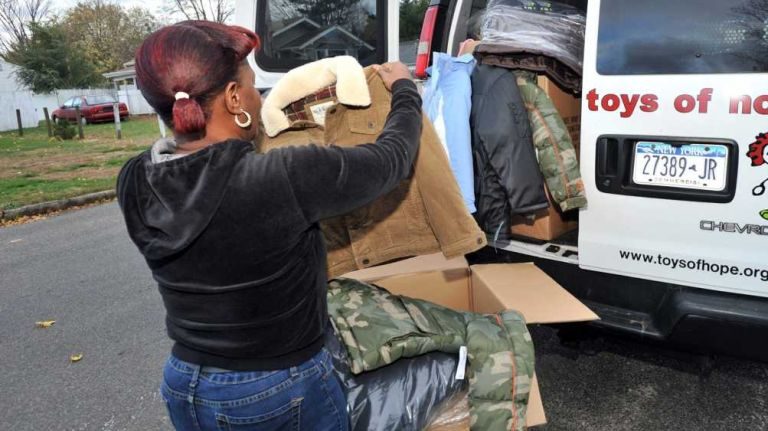 As printed in Newsday

As the first sprinkle of snow hit Long Island Monday, one East End single mother had no choice but to dress her 5-year-old son in a coat so small his arms extended long past the sleeves.

"I put it on him this morning, and he said, 'Mom, this coat doesn't fit.' He said, 'Can you go just get me a new one?' It crushes me," said the woman, 30, who agreed to be identified only by her middle name, Marie.

She is one of about 400 people on a waiting list for new coats from Toys of Hope, a Huntington Station charity that has provided holiday toys, clothing, food and other assistance for those in need since 1994.

Founder Melissa Doktofsky said her group's been getting 100 calls a day from people desperate to find warm clothes as the temperature drops.

"People are calling, frantic - 'My child doesn't have a sweater or clothing to wear to school,' " Doktofsky said. "They aren't even calling about holidays. They're not even worried about toys."

Doktofsky said she's given out about 150 coats so far, but estimates she'll eventually need 20,000 coats for men, women and children for the season. The organization only gives out new coats that are either donated or purchased wholesale, she said.

"Donations are down and demand is up," she said. "By now in prior years, we would already have had donations coming in of money."

Despite the unseasonably cold day Monday, many winter coat drives are only now beginning to gear up for the season.

Cynthia Sucich, spokeswoman for the Interfaith Nutrition Network in Hempstead, said clients already have started asking for coats and other warm clothing. On Monday, her group will begin taking clothing donations solely of coats, scarves, gloves and other winter items from the public for the season.

"I'm anticipating that more people will start now to bring in the coats," she said. "We have some, but not what we normally have this time . . . [of] year."

Some groups say they're relying on partnerships with retailers and other businesses to provide coats, such as Hauppauge food bank Long Island Cares, which is partnering with Burlington Coat Factory and Old Navy.

Greta Guarton, executive director of the Long Island Coalition for the Homeless, said her group doesn't begin collecting coats in earnest until the end of December.

"We don't usually start our coat drives this early at all," Guarton said. "Of course, if I knew we were going to have snow by Nov. 8, maybe we would have."